Explore the best of Turkey in 7 Days. Tour Topkapi Palace, Hagia Sophia, Blue Mosque, and many other amazing historical attractions in Istanbul. Float above the magical volcanic landscapes of Cappadocia in a colorful balloon. Experience authentic local culture, cuisine, and wine in the Grand Bazaar, taverns, and wine houses.

ⓘ Instant Savings $100 discount when you book by August 4 Upon arriving at Delhi airport, you’ll be met and transferred to your hotel. The rest of the day is free.

*Hotel check-in time is generally 4 pm or later. If your flight arrives in the early morning (e.g. midnight or 7 am) we suggest you add a pre-tour hotel night during booking for a well-deserved rest before starting your tour.

Delhi is the capital of modern India. It has also been the capital of at least seven previous civilizations as well as the British Raj, and each have left behind a trail of monuments.

Explore the beautiful chaos of both Old and New Delhi, including Jama Masjid – India’s oldest and largest mosque. Experience a busy & bustling local bazaar on a cycle rickshaw through Chandni Chowk. Next is Qutab Minar – the world’s tallest brick tower, Humayun’s Tomb of the Mughal Emperor, India Gate, Parliament Street and Rashtrapati Bhavan (President’s Residence). Visit the most prominent Sikh temple, Bangla Saheb Gurudwara, and share one of the 25,000 free meals served daily in the temple.

After breakfast we drive to Agra, the erstwhile capital of the Mughal Empire. Enroute visit Sikandra Fort. Watch a breathtaking fully symmetrical sunset view of the Taj Mahal from across the river at Mehtab Bagh (Moonlight Garden).

After breakfast, visit to the legendary Taj Mahal. Built by Emperor Shah Jahan in loving memory of his beloved wife Mumtaz who tragically died in childbirth in 1631. Then breakfast.

Visit Agra Fort (Red Fort), a 16th-century Mughal fortress which also contains the imperial city of the Mughal rulers. It offers splendid views across the river towards the Taj Mahal.

We will visit a Zardozi workshop and a marble handicraft workshop

After breakfast, drive to Ranthambhore.

En route to Jaipur, we visit the ghostly former Mughal capital of Fatehpur Sikri (City of Victory) which has been deserted for over four centuries. Thanks to the very durable red sandstone from which it was built, Fatehpur Sikri remains well-preserved and is a fascinating place to explore.

Arrive at the Ranthambhore Park that sprawls over an estimated 400 sq. km (150 sq. miles). Steep crags embrace a network of lakes and rivers, and on top of one of these hills is the impressive Ranthambhore Fort built in the 8th century. The tigers here can be spotted quite often, even during the day. With the strict measures that have been taken for their conservation, the tigers seem quite accustomed to human activity and take the visitors in stride. For its relatively small area, the park has a rich diversity of fauna and flora.

Enjoy a morning and afternoon wildlife safari with our private jeep.

Enjoy a morning wildlife safari in the park before departing to Jaipur this afternoon.

Day 8: The Pink City Of Jaipur

Visit the stunning 16th century Amber Fort perched on a hillside overlooking the dusty plains, regal palaces, sleepy villages, and stone carved temples below. Reaching its summit on a jeep (or request an elephant ride during reservation) we enjoy a tour of the fort’s well-preserved interior grounds including Sheesh Mahal (Palace of Mirrors) with its interior embellished of reflective glass tiles.

Visit the City Palace in Jaipur, an imposing blend of traditional Rajput and Mughal architecture. Jantar Mantar is an ancient open-air astronomical observatory and UNESCO world heritage site. Photo op at Hawa Mahal (Palace of the Winds) where it’s high screen walls allowed the women of the royal household to observe street life without being seen.

After breakfast, hotel check-out and transfer to a transit hotel in Delhi.

Hotel check-out in the evening and transfer to Delhi airport (DEL) for your flight home.

Hotels We carefully handpick our hotels to ensure they provide you with the best comfort and experience. For Private Tours, you may request a specific hotel as one of the customizable options.

Hotel check-in time is generally 4 pm or later. Check-out time is around 11 am. Hotels usually allow early arrivals and late departures to store your luggage in their luggage room for a few hours.

ⓘ Instant Savings 10% off when you book by June 16

Departures for Small-Group Tours (Land Only)

Departures for Private Tours (Land Only)

You Choose Your Own Dates   Private Tour Price Details $1795 $1670
This memorable Greek adventure kicks off from the most famous Greek islands, Mykonos and Santorini in the sparkling Aegean Sea. The tour ends in ancient Athens. You focus on spending glorious days getting lost in the labyrinthine lanes of island towns, and leave the inter-island logistics to us. Visit amazing volcano craters, idyllic coves, windmills,…
Culture & Heritage
Deals
Greece
Leisure Tour $2035 $1870
Explore the best of Turkey in one week. Tour Topkapi Palace, Hagia Sophia, Blue Mosque, and many other amazing historical attractions in Istanbul. Visit the Old City in Antalya and be mesmerized by whirling dervishes. Float above the magical volcanic landscapes of Cappadocia in a colorful hot air balloon. Experience authentic local culture and delicious…
Culture & Heritage
Deals
Leisure Tour
Turkey 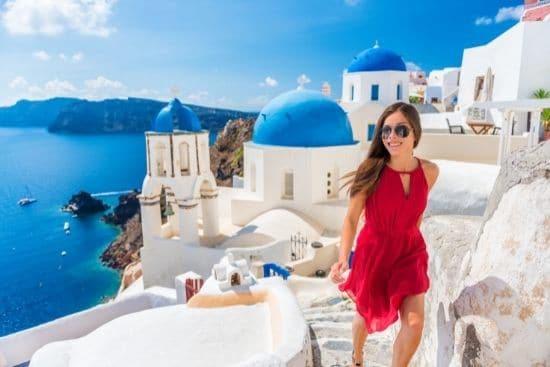 $3265 $3115
Start in Athens as you explore the Aegean Sea, Santorini, and the Crete islands. Discover the ancient world that once was before, getting lost in the labyrinthine lanes. Visit volcano craters, idyllic coves, seaside cafés, and ancient forts.
Culture & Heritage
Deals
Greece
Leisure Tour $2480 $2280
From the legends of Troy to ancient Greek cities, on this in-depth voyage through Turkey you will visit the sites where history happened. See the fairy-tale landscape of Cappadocia and famous Pamukkale Hot Springs. Taste traditional Turkish cuisine and shop at Istanbul’s historic Grand Bazaar.
Culture & Heritage
Deals
Leisure Tour
Turkey $1960 $1810
Spend 1 week with the best of both worlds as you compare the new with the old on this tour to Dubai and Abu Dhabi. Both Emirates have their own unique experiences and are replete with luxurious World Record attractions. There’s something for every type of traveler to enjoy.
Culture & Heritage
Dubai & Abu Dhabi
Leisure Tour